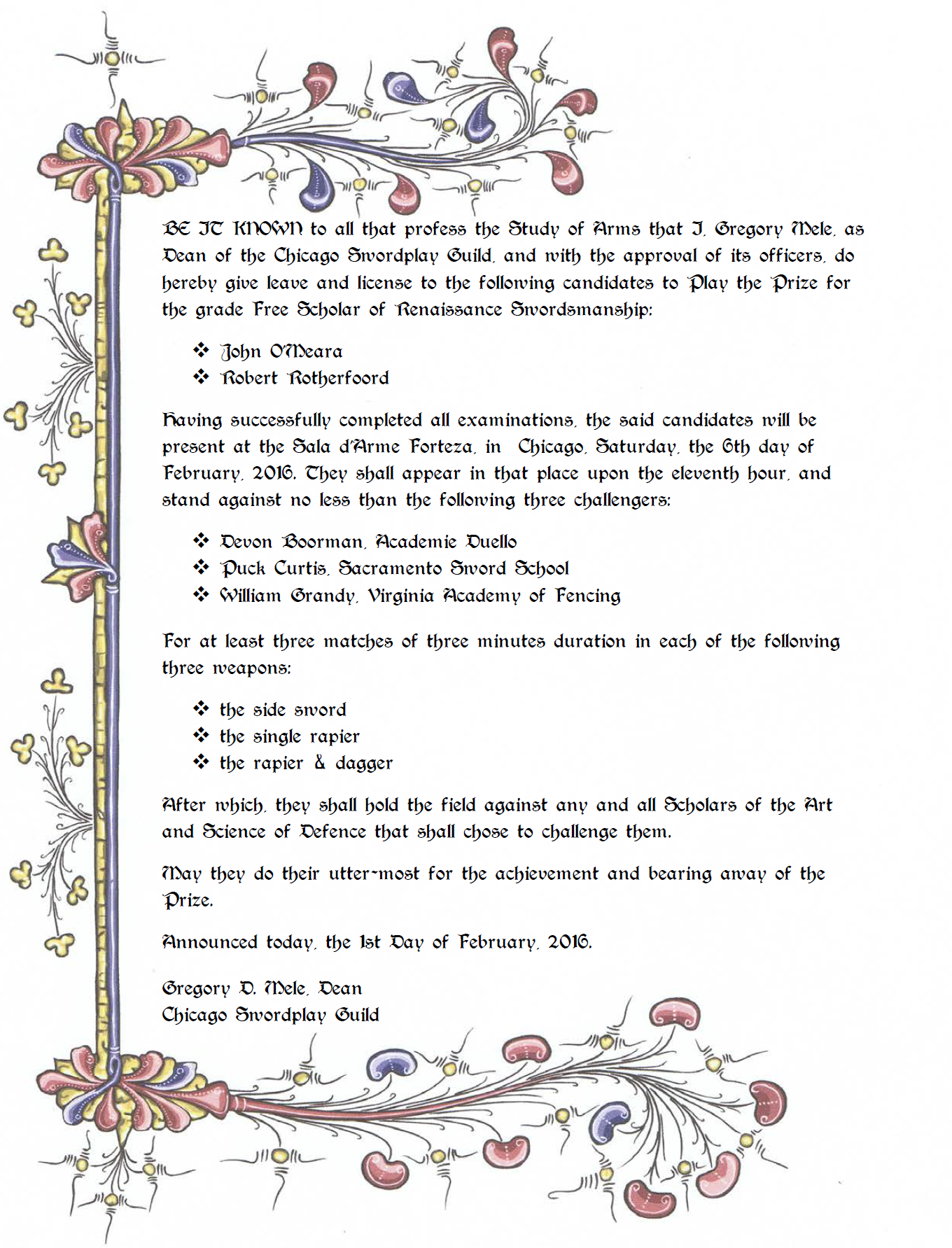 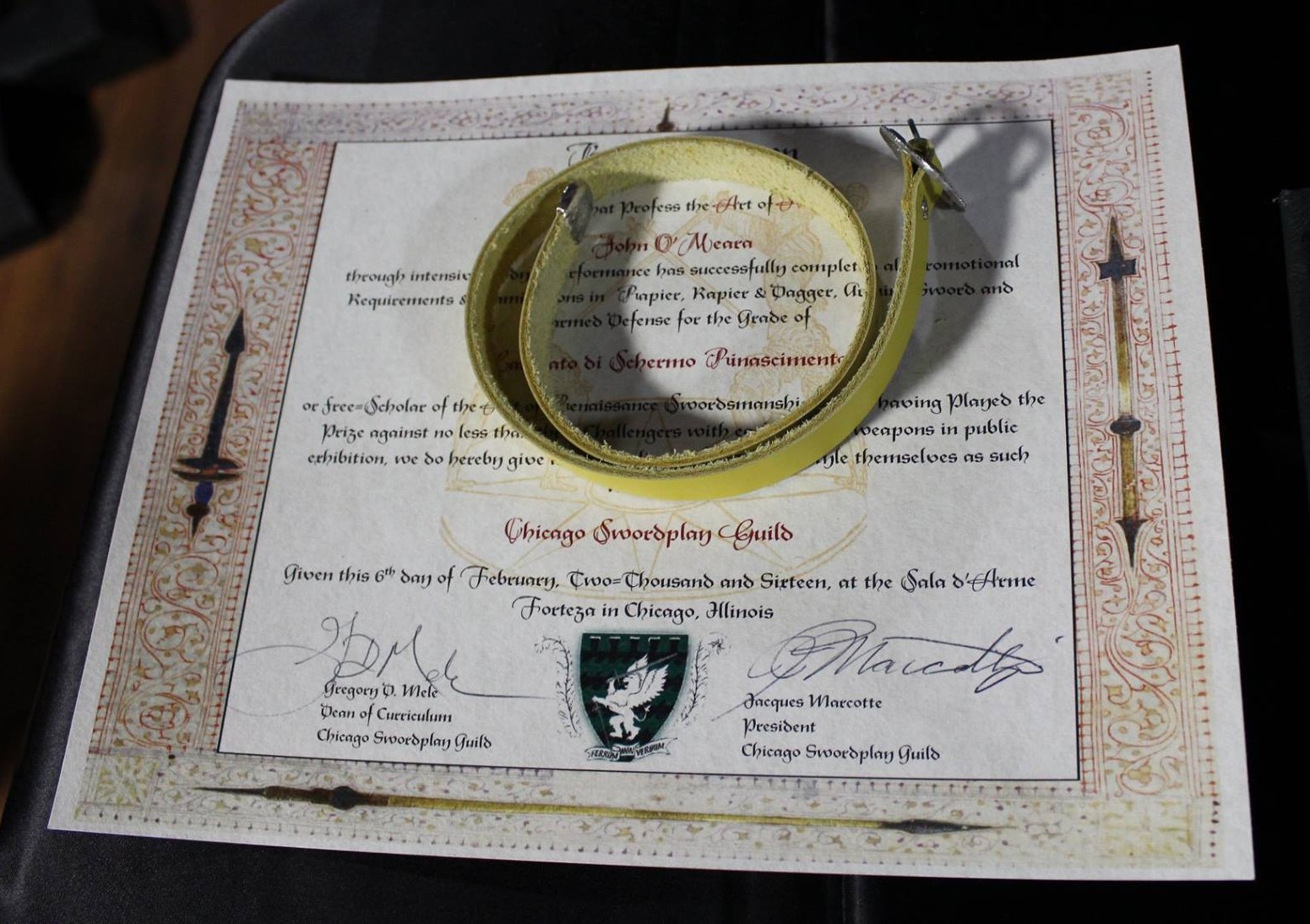 This past Saturday saw a momentous occasion for the Chicago Swordplay Guild: our second Free Scholar’s Prize and our first-ever in Renaissance Swordsmanship. The Prize is not a play, a tournament or an exam, though it has elements of them all. It is a right of passage whose origins extend back over half a millennia, and is the most ceremonial event we have in the Guild, as well as the most personally meaningful to the student being tested.

[For more information on Prizes as they were historically and used in the CSG, see What is a “Playing of the Prize”?

To qualify to play the prize for Free Scholar, students have completed at least five to seven years training in the weapons for the curriculum being tested; in this case the Bolognese side sword, the rapier, rapier & dagger, wrestling (abrazare) and unarmed defense against the dagger. Physical exams in these disciplines amounted to about four hours of testing, and there was also a written exam for each. Additionally, each student is required to submit a written, research paper; here is Robert Rotherfoord’s paper on the Universal Parry and Great Blow in Bolognese fencing. Once the exams have been passed and the final paper accepted, then the Prize can be held.

Going back to our first Prize in 2001, it has been the CSG’s tradition to never inaugurate a new rank without bringing in outside teachers and swordsmen to stand as challengers, specifically to avoid nepotism and developing a salle art rather than a truly martial one where students learn how to defeat students in their school, and their school alone. As Dean, I felt it crucial I find three of the best Renaissance swordsmen in North America to stand as Challengers, and fortunately, my first choices all said yes. Thus, John and Rob found themselves standing across the list from:

All of these men are long-time practitioners and teachers of the Art of Defense; Devon and Bill run two of the largest HEMA programs in the world. In addition, while Devon practices the same arts we do in the CSG, the other Challengers brought surprises of their own to the table. Bill Grandy is also a longtime student of Salvator Fabris’ rapier method, and is familiar with Bolognese side sword, but his cutting-sword focus is in the German messer and longsword. Puck is one of the world’s premier exponents of La Verdadera Destreza, a system that rivaled the Italian tradition and uses a different set of strategies and tactics to achieve the same goal: pointy end into the other man. I had made these choices by design, as the idea was to make the Prizors not only display their ability to fight a like style, but to use their art against a foreign one.

The format of the Prize is similar to that played for Scholar, only with three weapons: each Prizor faces three Challengers in a three minute round of combat, for nine rounds of combat in total. They then hold the field in matches of three good blows against all Scholars who wish to challenge with either the sidesword or rapier. Challenges at are fought under a set of rules somewhat more “permissive” than those of the 16th century, in large part because of access to additional safety gear:

The First Passage: Side Sword

The candidates had asked to fight the weapons in chronological order: sword, rapier & dagger and then rapier alone. It was determined that the order of challenges would be Puck third, Devon second and the honor of the first blow would go to Bill. Well before their arrival in Chicago, I had been in contact with the Challengers and discussed John and Rob’s particular fencing quirks, strengths and weaknesses, so each was not only going into the list to fight them, but to test specific things, most particularly, their weak points.

The first round was dedicated to the sword alone, which is  Robert Rotherfoord specialty. As you watch the fights you will see that he and John use the art somewhat differently: as a rapier specialist, John gravitates towards the later style advocated by Angelo Viggiani, including the powerful use of a rising parry transforming into the punta sopramano/imbroccata (overhand thrust) made on a short lunge, or the use of the same thrust as a provocation to set-up follow on actions.

John O’Meara vs. Puck CurtisRob, who favors Manciolino and Dall’Aggochie, uses shorter thrusts and more cuts made with steps off-line.

Robert Rotherfoord vs. Puck Curtis
The fights were vigorous and also great fun to watch; the audience loved the dynamic elegance of the Bolognese system’s flowing, looping cuts and powerful thrusts.

The second round was with the rapier & dagger, the newest part of the Renaissance scholar curriculum, and a very demanding one, as it requires constant changes of initiative while wielding two dissimilar weapons both in conjunction and separately. It can be very fast and exciting to watch, and as I personally had not seen Destreza’s version of the system, it was personally interesting to watch how it played against the “Salvatoran Art”.

The rapier used alone is the first weapon taught in the Renaissance curriculum and goes back to the very first year of the Guild’s history. It is an easy weapon to understand, but a difficult one to master. Although we draw material from a variety of c.1600 sources, far and way the core of our curriculum comes from the monumental text  by Master Salvator Fabris.

However, as the third weapon fought, you can see the fatigue starting to kick in and the Prizors periodically retreat or come to grips just to catch their breaths, rather like “the clinch” in modern boxing.

In times past it was the custom that Prizors must fight no less than three Challengers of the grade sought, before the Prize would be considered won, but that he must stand against any and all challengers who might come forth to test him. Likewise, having faced three challenges in each of the three weapons of the Free Scholar, the candidates then stood against any Scholar would would challenge them to a match of three good blows with the rapier or sidesword.

Rob’s Gauntlet
You can see both fatigue and the effect of earlier cuts to the sword arm taking their toll in these bouts, as Rob drops his sword twice because his hand is getting numb.

(You may also hear me asking David Farrell if he is wearing his long underwear. As it turns out, yes, yes he was. Don’t ask.)

Historically, once all the bouts were over, if the Prizor was judged victorious by the four Masters, he would be declared “a well-tryd and sufficient man with divers weapons”. He would then (after collecting the change littering the stage)  swear his oath of obligation, and be escorted by his new peers back to the school and from there off to do much drinking.  Fortunately, our guests felt that the John and Rob easily fulfilled the requirements of their new rank, leading to the ceremony of Investiture.

Our modern Guild’s Scholar’s oath is adapted directly from that of the Elizabethan London Company of Masters, requiring the student to treat those above and below him or her with respect, to train diligently and with pride, but not vanity, to be sure that their actions and deeds in the list or the classroom bring renown, not shame, to their fellows and teachers, and to be a good citizen.

Kneeling and reaffirming  this oath on the hilt of a sword, the gentlemen received their new licenses and their green garters were replaced with gold ones.  As stated in the ceremony itself:

Gold was considered the noblest of metals, exceeding all others in value, purity and finesse. It represents the light of the sun, and the nobility of princes. It is also associated with excellence and achievement, and its bearer surpasses all others in valor. As such, the golden garter is a fitting symbol of a Free Scholar of the Art of Arms.

As John was Rob’s teacher in rapier and rapier & dagger, it only seemed appropriate they he bestow the garter himself. However, as this would normally be the provenance of a Provost…

We caught John off-guard and informed him that such he was about to be!

This decision was not made lightly by myself or the three Challengers. John joined the Guild in the year of its founding (1999) and has spear-headed the Rapier curriculum since 2002. Over that time, there have been many ups and downs — a steadily evolving curriculum that went through a few reboots, a seeming curse where every time new Scholars were made, life took the away from both the Guild and the Art, significant, side-lining injuries with long recovery time and more. Thus, it is some how particularly appropriate that John received his rank of Provost at a time when our Renaissance swordplay program is larger and more robust than ever before.

Some of Mr. O’Meara’s accomplishments leading to his award of Provost:

Thus, it was my particular honor as the Guild’s founder and Dean to elevate Mr.John O’Meara as the CSG’s first Rettore di Schermo Rinascimento (Provost of the Art of Renaissance Swordsmanship).

Besides the gold garter, as a Provost John was given a ceremonial chain of office; its links representing the long line of teachers who have preceded us. The chain is not whole, just as our lineage was broken long ago, but instead is closed by a pendant of St. George the Dragonslayer, paragon of chivalry, for this is a chivalric art, and it is through its values that what was broken is again made whole. In this sense, the chain becomes a fitting symbol uniting past to present, and present to future.

This was a truly special day — the culmination of a decade and a half of hard work as well as the inauguration of the next phase in the Guild’s history, particularly in the field of Renaissance swordsmanship. My thanks to Maestri Boorman and Curtis and Coach Grandy for attending and helping bestow the Provost rank, and to John and Rob….words cannot express my pride.