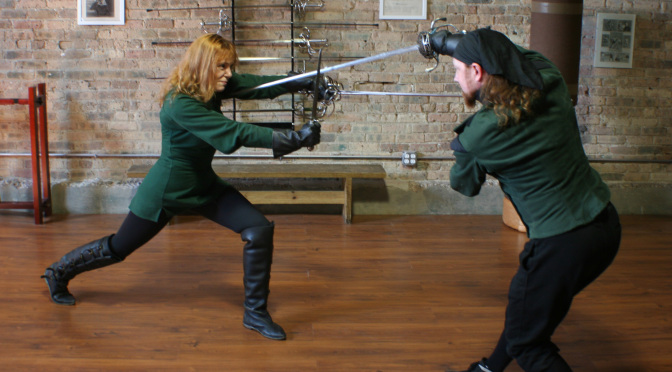 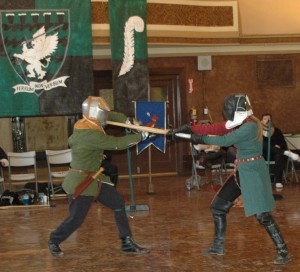 The Guild’s preliminary focus is on two distinct topics. The first is Medieval Swordsmanship, or armizare, and focuses on the weapons of the European ‘knightly class’ used during the 13th – 15th centuries. The medieval material includes both armoured and unarmoured applications. The second course is Renaissance Swordsmanship, and focuses primarily on the rapier and other weapons used from roughly the mid-16th through mid-17th centuries.

Students will find that the underlying principles of movement, timing, distance, body mechanics, etc., that are applicable to the first weapon they learn, will largely carry over to all of the others. Part of the Guild’s methodology is to focus on the underlying principles and body mechanics common to all of these weapons. Understanding of how a particular weapon’s morphology affects these core principles are then taught through a study of the individual weapons themselves.

The Italian Longsword is based on the work of two 15th century masters: Fiore dei Liberi’s Fior di Battaglia (1409), and the De Arte Gladiatoria Dimicandi of Filipo Vadi (c.1482 – 87). The student will learn the basic poste (guards or stances), footwork, cuts, thrusts, and defenses. 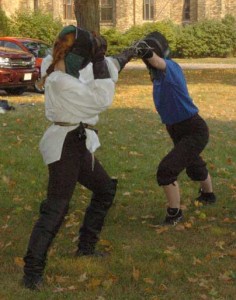 The Italian Rapier method taught is an overview of the weapon as it evolved and was used during the last half of the 16th century, based on the work of Salvator Fabris’ Scienza d’Arme (1606), with additional material from Ridolfo Capo Ferro’s Gran Simulacro dell’ Arte e dell Uso della Scherma (1610) and Nicoletto Giganti’s Scola Overo Teatro (1606).  Students learn the basic guards, hand positions, footwork, thrusts, cuts, and the crucial concepts of tempo (time) and misura (distance.)

Close Quarter Combat is a part of historical swordsmanship and is taught to all students.  The Italian masters-at-arms taught a wide variety of techniques: joint-locks, strikes, throws, ground fighting, unarmed vs. dagger attacks, dagger vs. dagger attacks, and improvised weapons. At the Novice level, grappling covers a series of drills meant to teach basic joint locks, throws and grips, a series of unarmed wrestling techniques, and a series of ten unarmed defenses against a dagger-wielding attacker.

Novices invited to formally join the Chicago Swordplay Guild will continue as novices for up to a year before being invited to test for the scholar grade. The Guild curriculum is based on a series of “courses” taught at the different grades, or ranks. You can read more about our ranking system under Grades and Prize Playing.

There are many “branches” of the European martial art “tree” (English, French, German, Italian, Portuguese and Spanish), and while they share many basic methods and principles, they are still unique and distinct. The Guild’s curriculum focuses on the Italian tradition, and strives to keep the sub-traditions that make up our curriculum clearly defined, rather than creating a modern amalgam. Continuing the division of Medieval and Renaissance Swordsmanship our Scholar curriculum includes:

CQC is comprised of grappling and dagger combat, building upon the foundations you developed in the Novice Curriculum. This leads directly into the dagger curriculum, which is in two parts: unarmed vs. dagger defense and dagger vs. dagger combat. 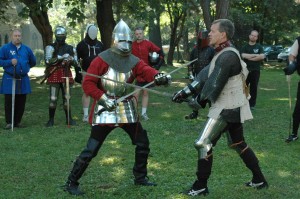 The Armizare curriculum is built upon the longsword novice course, and applies those lessons to the use of three weapons: the longsword, arming sword and spear. At this level, student will also have a chance to study all three of these weapons, as well as grappling and dagger fighting, as they are applied within the context of armoured combat. 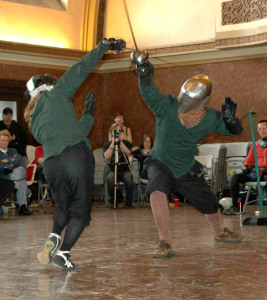 By the later 16th century the longsword or sword and buckler sword alone had been replaced by the sword alone as the core weapon of the sala d’arme. Only once this weapon had been mastered was the use of companion arms taught, occasionally followed by polearms and two-handed sword. Although the rapier has come to symbolize the era, the older, military sword continued to be used throughout the period. The three weapons of the Scholar grade includes rapier, rapier and dagger and arming sword.

After successful completion of the Scholar’s courses, a student may petition to test and play the prize for the grade of Free Scholar. Historically, Scholars would train and test in two weapons (usually sword and long sword), along with consecutive training in close quarter combat. Likewise, the CSG Free Scholar’s Prize is played with the three weapons taught in the respective curriculum.

The historical material left to us is, sadly, incomplete; the medieval treatises were not so much manuals, as treatises or mnemonic reminders of concepts taught through the examples of specific techniques–applications of those techniques.

When modern students attempt to reconstruct these techniques, they are thus faced with much that remains unsaid —or undrawn— that must be filled in. Rather than approaching the treatises as a basket of techniques, we rather want to distill —or to borrow (with credit) the distillations of other modern students— and extract the principles that underlie the system. This then presents us with a conceptual framework into which the historical techniques can be understood in context. To this end, wherever possible we have based our methods on the historical Masters of the period to reduce as much as possible the infusion of outside variables.  However, the simple truth is that pragmatism and openness are necessary to reconstruct nearly lost combat arts, and the Guild freely admits to adopting teaching methods or concepts from outside sources in the development of drills and teaching methods.

Throughout the curriculum emphasis is placed on the underlying biomechanics and principles of fencing, and their application to a specific weapon, instead of the weapons themselves. Although there is a wide variety of weaponry from the period, students will find that the underlying principles of movement, timing, distance, body mechanics, etc., that are applicable to the first weapon they learn, will carry over to all of the others. The study of historical fencing, therefore, becomes a process in which new material continually builds upon previous instruction.