The city of Bologna, the capital of the Italian province of Emilia-Romagna, has a rich fencing pedigree, stretching from the 14th to 19th centuries. One of the most famous traditions to come from this central Italian city was the fencing school founded in 1415 by Lippo Bartolomeo Dardi, a swordsman, astronomer and professor of mathematics at the University of Bologna, just years after dei Liberi composed his il Fior di Battaglia. Although tradition ascribes a book to Dardi, no such manuscript has ever been found, and the exact form of the art as taught by its founder remains unknown. 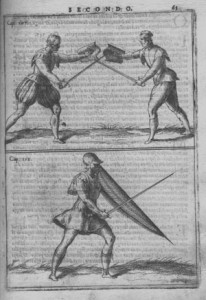 Our primary sources for this style are five works from the 16th Century: Antonio Manciolino (Opera Nova, 1531), Achille Marozzo (Opera Nova, 1536), Angelo Viggiani (Lo Schermo, written circa 1550, published posthumously in 1575) and Giovanni dall’Agocchie (Dell’arte di Scrimia, 1575). Most recently, an extensive, yet incomplete and anonymous manuscript (c.1550) was found in the city of Ravenna, and provides a great deal of clarification and explanation on the tradition’s theoretical framework.  All of these texts share a consistency of terminology and curriculum that is traced to the most famed teacher of the tradition, Guido Antonio de Luca, who flourished in the city around 1500 and “from whose school came more warriors than from the belly of the Trojan horse”, including Antonio Manciolino and Achille Marozzo, and the famed condottiero, Giovanni de Medici.

Like the dei Liberi tradition, the “Dardi School” was a cognate school of armed and unarmed combat, meant for both civilian and military use. But whereas abrazare, dagger and longsword techniques formed the former’s foundation, the Bolognese school’s exemplar weapon was the single-handed sword. This sword was both the simple arming sword of the Middle Ages and a new form, fitted with finger rings and a knuckle bow to protect the hand. Sword use was taught both alone and in conjunction with a wide variety of defensive arms:

In addition to the arming sword and its companion weapons, the Dardi School taught a wide variety of two-handed weapons, including: 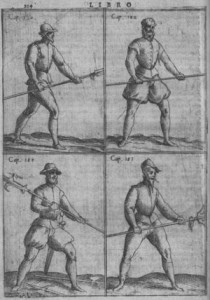 Finally, while notably less emphasized then in the Dei Liberi School, the Dardi tradition also taught a variety of close-quarter combat techniques:

The Bolognese masters have also left behind a very specific didactical method, including long solo-drills, like those of Okinawan kata or Chinese kung fu forms, assalti (sequences of techniques to be used in friendly matches) and abbattimenti (techniques to be used in serious duels). In all, the Bolognese style is extremely dynamic and flamboyant, with its many guards, varied footwork and creative attacks.

The Dardi School forms both a chronological and technical “bridge” in the Guild between the medieval and rapier curriculums. Guild members are first exposed to the school in the Scholar grade, where the work of Angelo Viggiani, and to a lesser extent, both Manciolino and dall’Agocchie, help form the technical core of the basic arming sword curriculum. Free Scholars will also study the sword used in conjunction with companion arms, such as the buckler, primarily based on Manciolino, Marozzo and the Anonymous Bolognese. The treatises of the Dardi School also form an important source for CSG polearm instruction.

How to Get Started

Assuming you don’t live in Chicago, but are interested in delving into the Bolognese tradition, particularly sword in hand,