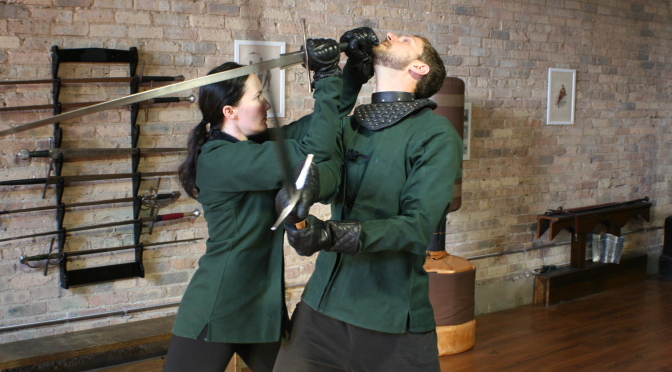 Founded in 1999, the Guild is a modern school of swordsmanship and martial arts. We seek to be consistent with the methodology of the ancient European fencing schools by combining scholarship and research into the teachings of the historical Masters with the practical knowledge gained through solo and partnered drilling and fencing.

Since techniques are taught in reference to how effective they would be in a real encounter, the Guild practices with an absolute emphasis on safety, control, competence, and skill at arms.

The “Martial Arts” are literally, the “Arts of Mars”, the Roman god of war, so it should be no surprise that Europe boasts a complex martial culture that extends back into antiquity and continues to this day. The Chicago Swordplay Guild connects with this tradition of Western martial arts by training in the historical fighting arts of Medieval and Renaissance Italy (1350 – 1650): 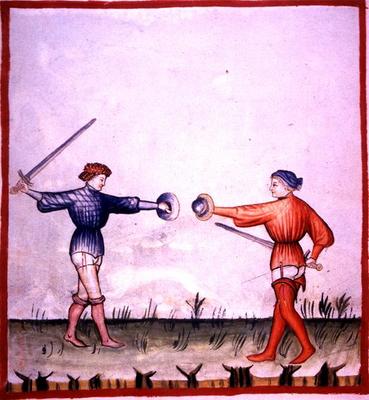 The “Martial Arts” are literally, the “Arts of Mars”, the Roman god of war. It should be no surprise that Europe boasts a complex martial culture that extends back into antiquity and continues to this day. The Chicago Swordplay Guild connects with this tradition of Western martial arts by focusing on the historical fighting arts of Medieval and Renaissance Italy (1350 – 1650). 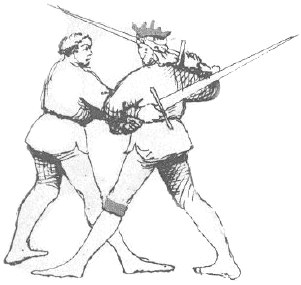 The CSG’s medieval martial arts curriculum is primarily based upon the surviving records of the tradition founded by the Friulian master at arms, Fiore dei Liberi. Dei Liberi gave no formal name to his school or his martial art, simply calling it armizare (the art of arms), and we only know that the style outlived the founder because of the surviving manuscript of another master at arms, separated from dei Liberi by two to three generations of time. While we know of this later master, Filippo Vadi, through the treatise he penned, dei Liberi’s fame was such that he has been the subject of periodic biographies over the last six hundred years, and the city hall of his hometown is to this day found on the Via de Fiore dei Liberi. Yet between them, these two men have left us a complete martial art of a richness and complexity to stand beside any other in the world.

The Flower of Battle

Fiore dei Liberi’s art is preserved in the manuscripts he left behind, all entitled il Fior di Battaglia (the Flower of Battle). Presented to the Marquise d’Este in 1409, at least five distinct copies once existed. Only four are know to survive, each with slight differences. The manuscripts are named for the collections that hold them: the John Paul Getty Museum in Los Angeles, the Pierpoint-Morgan in New York City, the Bibliteque National in Paris, and the Pissani-Dossi collection, formerly in Italy. 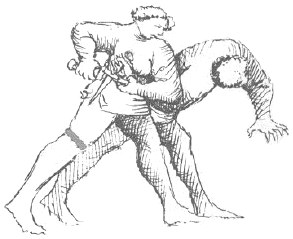 The Getty and Morgan manuscripts consist of illustrations accompanied by short paragraphs of text, while the Pissani-Dossi and BN copies replaces the paragraphs with rhyming couplets, perhaps meant as memory aids for the student. The Getty manuscript is the largest and most detailed of the three texts, presenting a carefully organized learning scheme. In the prologue dei Liberi provides his biography and credentials, including his five duels with other masters and the names and ranks of his famous students and their martial accomplishments. He then presents his basic tactical advice to the combatant, including priorities and cautions, followed by the requirements for fighting in hand-to-hand combat. The prologue ends with an explanation of the manuscript’s organization, and a dedication to Niccolò d’Este, Marquise of Ferrara.

The Fior di Battaglia divides l’arte dell armizare into three principle sections: close quarter combat, long weapon combat and mounted combat. The close quarter combat forms the basis for many of the grappling and disarming techniques used in later sections of the manuscript, and is used in or out of armour, with the dagger section forming the single largest collection of techniques:

Long weapon combat begins with the introduction of the sword and swordplay forms the basis for all other long weapon combat. The treatise also includes several other “knightly” weapons used on foot, both in and out of armour, such as the spear and poleax. There are also several unusual weapons, such as monstrous, specialized swords for judicial combat, and hollow-headed polehammers, meant to be filled with an acidic powder to blind the opponent!

Finally, mounted combat, reintroduces many of the disciplines already presented, this time adapted for combat on horseback, again in or out of armour. While the Guild does not practice mounted combat, the mounted techniques contain many interesting insights into the other sections of the art of arms.

Within these subsections, dei Liberi taught his art through a series of zoghi (“plays”) —formal, two-man drills akin to the kata of classical Japanese martial arts— that were both technique and tactical lesson. 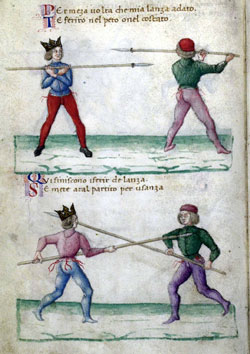 Filippo Vadi’s work, De Arte Gladiatoria Dimicandi, written c.1482, is very similar to the Pissani-Dossi manuscript, consisting primarily of beautifully painted figures with rhyming couplets. Vadi covers a smaller subset of weapons from Fiore: the dagger, the two-handed sword in and out of armour, the spear and poleaxe. The armoured combat techniques are reduced in scope, and abrazare, one-handed sword and mounted combat techniques are omitted entirely. But De Arte Gladiatoria Dimicandi’s unique virtue is its prologue of sixteen verse chapters, in which Vadi addresses the general and specific principles of swordmanship, such as the proper length of the sword, tactical advice for facing stronger opponents and multiple opponents, how and when to parry and to control the fight when the swords are crossed, and lessons on timing, feints and a few specialized blows. These chapters provide fascinating insights into the tactical application of the art, and add clarity and subtlety to many of the plays found in all four texts. 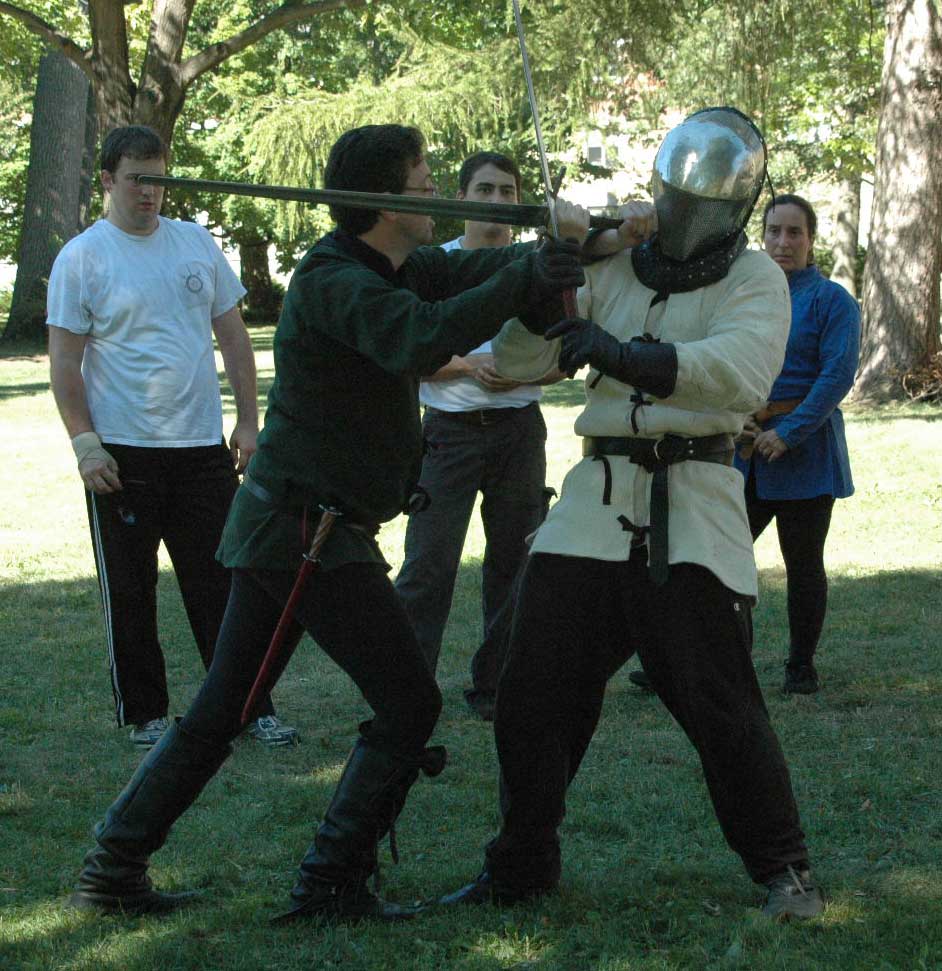 Armizare within the Guild

The dei Liberi tradition is the centerpiece of the CSG curriculum. It is the source for all of the abrazare, dagger and longsword material in the Guild’s novice curriculum, and this material is also expanded upon in the higher grades, with the introduction of the arming sword, armoured  and polearm material.