In his Opera Nova (1536) Achille Marozzo covers the use of a number of different shields. The vast bulk of the work (and indeed, the largest section of his book) focuses on the use of the sword and buckler,  followed by the sword and targa (a small, square buckler), but he also dedicates considerable space to the sword and rotella (arm-strapped, round shield) that was a common infantry arm in the 14th – early 17th centuries. All of these weapons receive considerable attention by 16th century fencing masters, and even receive a little love by 17th and 18th-century writers. But Marozzo is also unique in providing four short chapters on another type of shield, the imbracciatura. This article takes a look at what this shield is, how it was used, and best of all, how to build your own!

The imbracciatura is an interesting footman’s shield of the late Middle Ages and Renaissance, a return to the long kite-shields of earlier centuries, though mounted so that it hangs vertically along the arm, in a similar fashion to the small, so-called “Hungarian shield” found in Eastern Europe during the 14th and 15th centuries. Also called a targone — not to be confused with the smaller, shield used in the gioco del ponte (“bridge game”) that survived into the 19th century —  the key characteristics of the shield are a) size, b) shape and c) the appearance of a sharpened  point, or brocco in the center or at the lower end. We’ll look at each in detail.

SIZE
Large infantry shields never completely fell out of fashion, particularly in the Italian peninsula, and artwork of the period shows kite, coffin, or long rectangular-shaped shields continuing to be used alongside the round, “rotella”, which would become predominant in the 16th century, and the newer pavaise. The vertical strapping, while not new to this period, seems to become increasingly more common in the late 14th century, and predominant as we move into the Renaissance.

The key element is that these shields are very large- usually protecting the wielder from shoulder to mid shin. 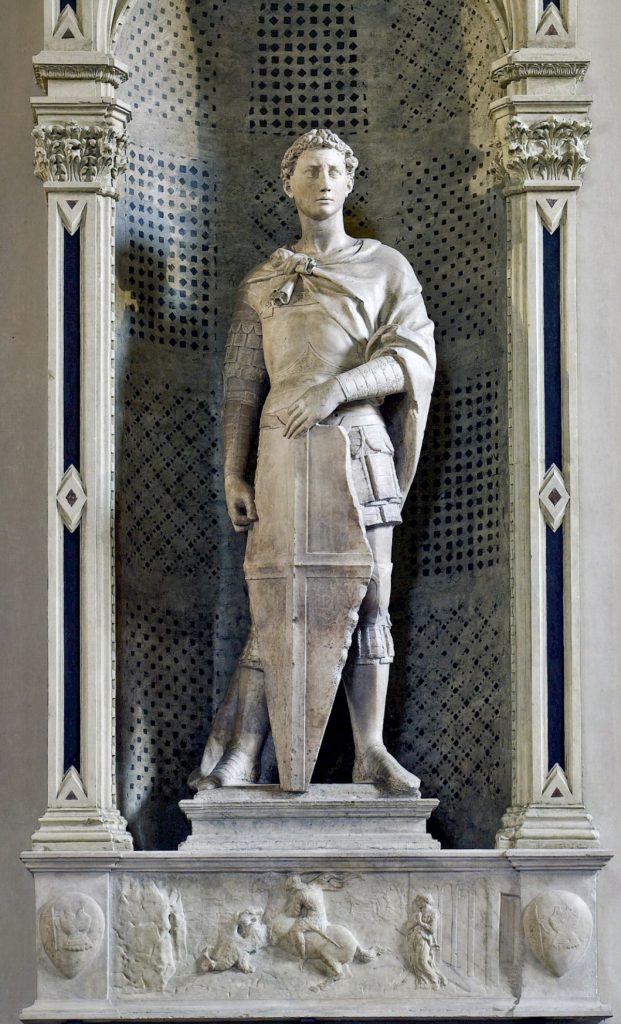 Usually, the imbracciatura is depicted as either kite or oval shaped, however, by the middle of the 15th-century, rectangular and “coffin” shaped shields also appear in artwork. As this is well into the Humanist era, with its interest in classical themes, the appearance, at least of the rectangular shield, may have been a way to reference the Roman scutum, much like the cinquedaea evoked the gladius and pugio or the interest in dueling with rotella and partisan called up the memories of heroic Greece.

The presence of center-line spike at the bottom of the shield is generally considered a key feature of the imbracciatura, and Achille Marozzo calls it out specifically in his Opera Nova (1536), but these spikes are rarely found in surviving shields from the period. Although a strike with the end of the shield itself would be plenty damaging, and such shield strikes are called out with the unadorned rim of the rotella, before considering the spike a flight of fancy, it’s worth noting that such spikes are part and parcel of the even more massive, center-gripped dueling shields found in the fight books of Hans Talhoffer (1458, 1467), Paulus Kal (1460s) and others.

A number of surviving imbracciature survive today, with a particularly well-preserved example found in the Bargello museum, in Florence, which most-closely approximates the one shown by Achille Marozzo.  Florence is also home to a far-plainer, older rectangular shield that is remarkably well-preserved in the Museo Stefano Bardini.

Another, oval-shaped shield, elaborately painted with Saint George slaying the dragon, is found in the Civico Medievale of Bologna, and is dated to approximately 1480 – 1400. For all their great size, the shield are relatively light, formed of curved plywood, faced in linen and/or thin leather, and backed in a thin parchment .

If the above pictures and video has inspired you, here is how you can build a reasonably historical imbracciatura of your own. (Or you can download Imbracciatura.) 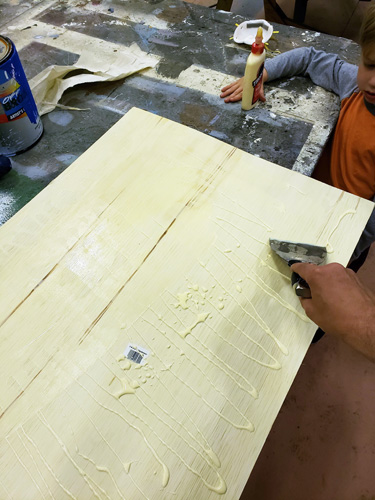 Start by coating one side of the plywood sheets with wood glue. Here we’re using a trowel to spread the glue evenly over the entire sheet. 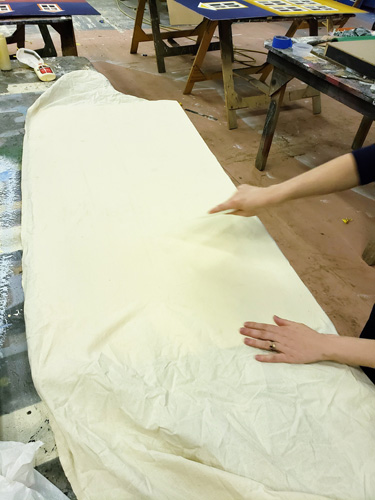 Take your muslin and spread it over the plywood, making sure the entire sheet is covered. We used a flat edge of a thick piece of plastic to push the muslin into the glue and eliminate any wrinkles. 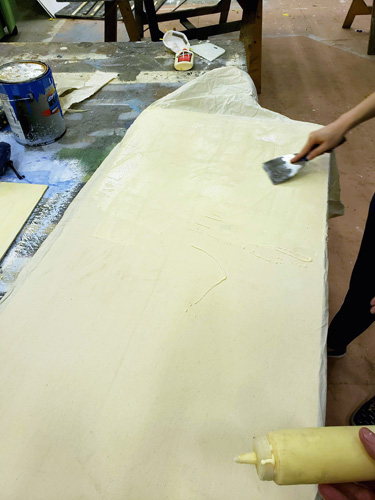 Coat the top side of the muslin (which is now glued to the first sheet of plywood) with wood glue in the same manner as we coated the plywood. 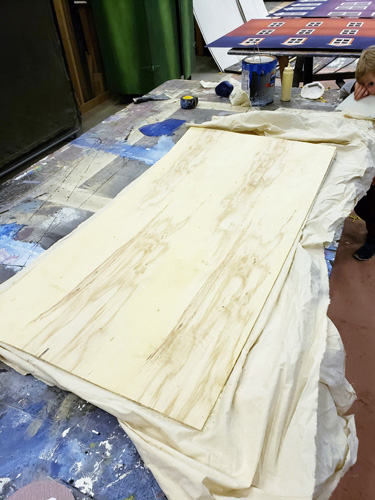 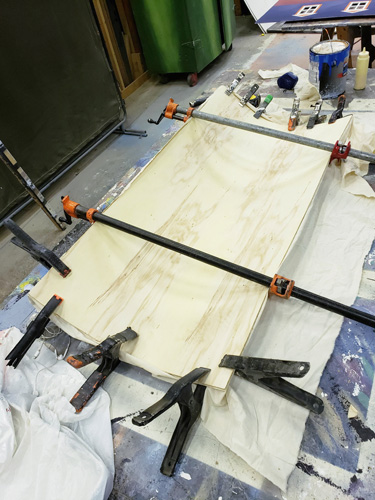 Clamp the perimeter of the plywood while the glue dries. We used two long clamps across the width to bend the plywood into place. Straps can also be used to get the desired curvature. 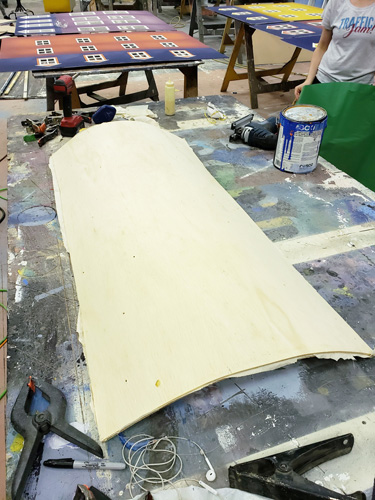 Let the glue dry overnight and remove clamps. Trim excess muslin. We now have a curved ‘blank’ to work with. 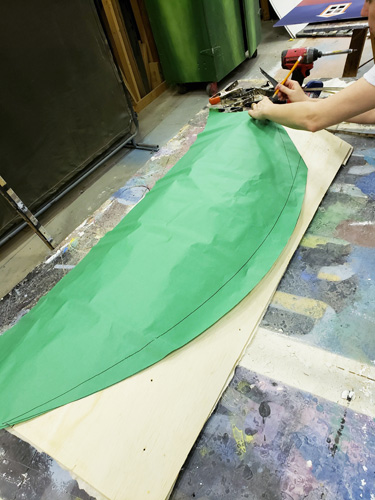 Mark the center of the plywood on both the top and the bottom. Trace half the shape of the shield on paper or any extra muslin. Place that ‘half’ pattern on one half of the plywood and trace it onto the wood. Flip the pattern and repeat on the other half. 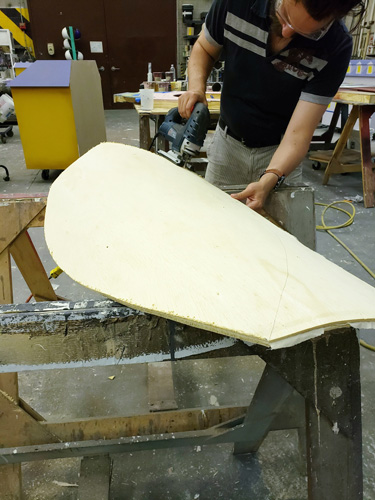 Use a jigsaw to cut out the shape of the traced pattern (remember your eye protection!). 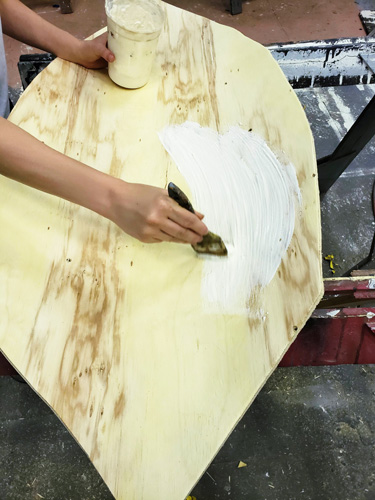 Coat the backside of the shield with white glue. 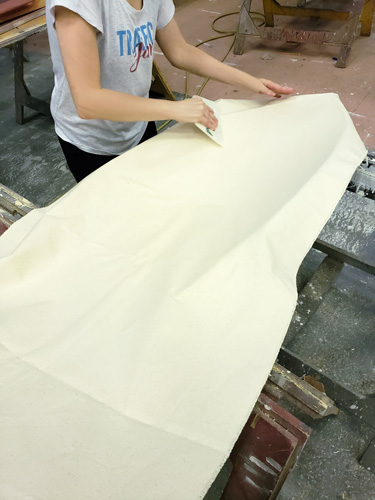 Lay the canvas over the glued side. We used the same flat edge of a flat piece of plastic to press the canvas into the shield and to remove and wrinkles. 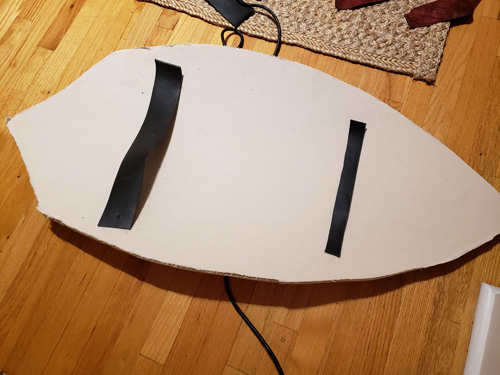 Cut the canvas to the edge of the shield using a box cutter. Place the leather straps on the back side and mark their placement. The top strap should be just below the armpit while the small strap should be an arm’s length away so the hand can grasp it. 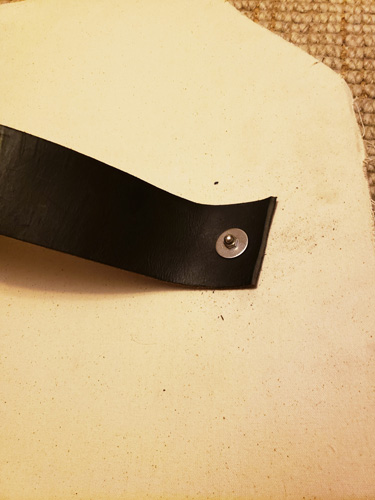 Drill holes through the leather and the shield at the ends of the leather straps. There should be enough play in the straps to get an arm through. Don’t leave too much slop or it will be too loose. Put the bolt through the holes from the front of the shield so you can put the washer and nut on the back side. 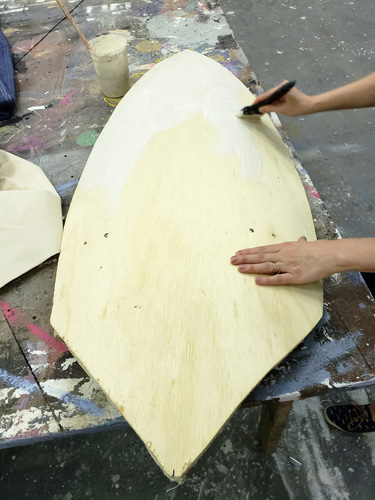 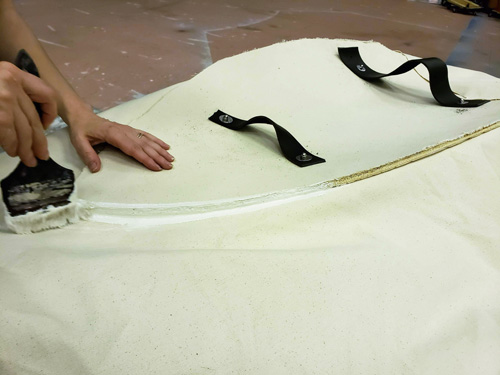 Apply white glue around the edges of the shield 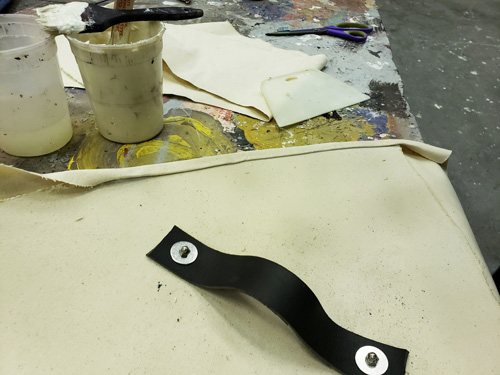 Trim the canvas, leaving 2 inches around the outside edge of the shield. Apply white glue to the canvas extending past the shield and double-fold the edge and apply it to the back of the shield. 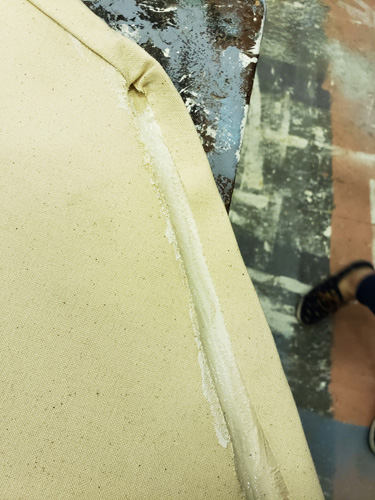 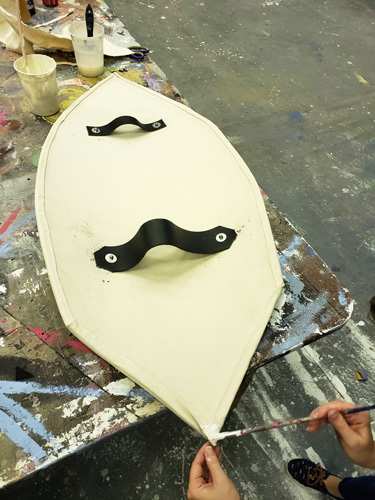 Let the glue dry and paint your shield!

(this version does not have a brocco spike at the end, one might be added later) 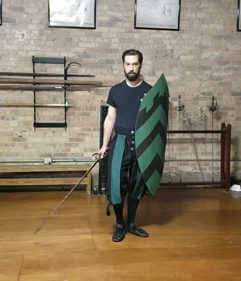 Marozzo, Achille, Opera Nova (1536)– English translation by Wanger, Jherek as The Duel, or the Flower of Arms for Single Combat, Both Offensive and Defensive, by Achille Marozzo, Lulu, 2019.