February 20 & 21, 2010 was the British Federation for Historical Swordsmanship’s annual conference, called S.W.A.S.H: Symposium on the Western Arts of Swordsmanship through History. Held at the Royal Armouries in Leeds, there really couldn’t be a better location for a conference on the study of historical European swordsmanship.

With 2010 being the 600th anniversary of Fiore dei Liberi’s Flower of Battle, armizare formed a centerpiece of the event schedule. Our good friends and colleagues Rob Lovett, Mark Lancaster and Mark Berryman of the Exiles were bound and determined to get a few Yanks over to teach, and went above and beyond to see that both Sean Hayes of the Northwest Academy of Arms, and myself attended.  I’m very glad that they did.

This was my (Greg’s) first time teaching overseas, we (Sean, CSG Free Scholar, Jesse Kulla, and myself) were more than taken care of, first during a few days of tourism in York, and then in Leeds. Your hospitality and friendship, and that of all of my friends in the Exiles, near and old, shan’t be forgotten! 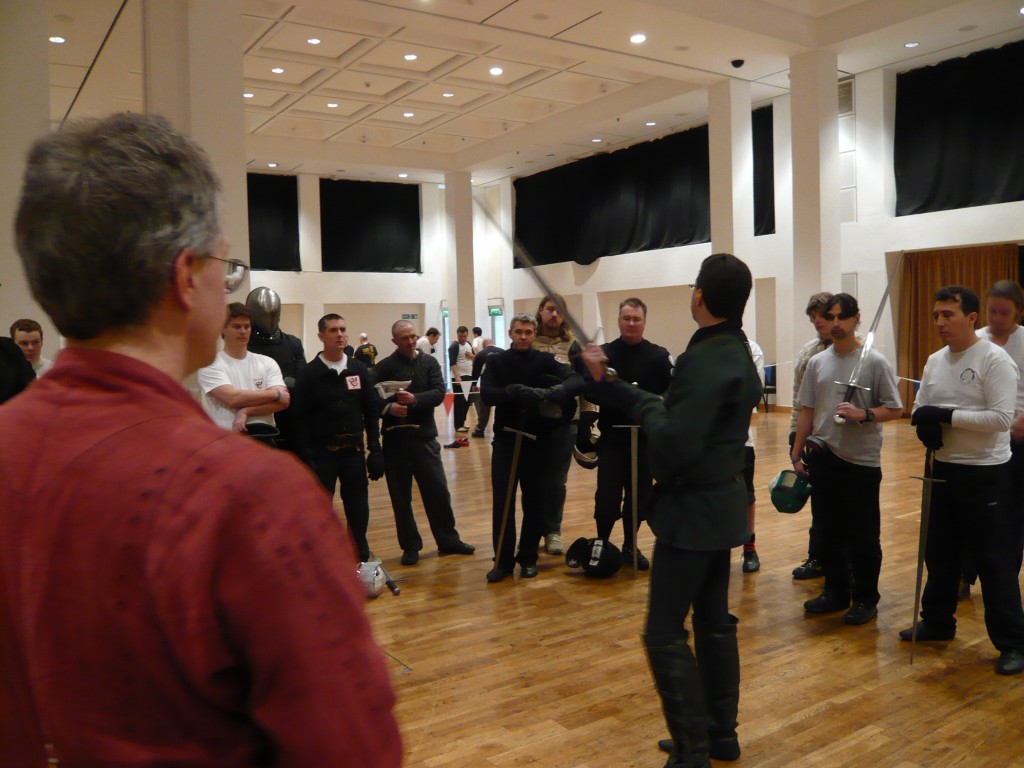 My class was on dei Liberi’s system for wielding the sword in one hand, and while there is never enough class time to cover all of the material you’ve prepared, my students were engaged, worked hard, and asked excellent questions.I also had an opportunity to participate with Mark Lancaster, Sean, and Kim from the Aberdeen Swordsmanship Group (another set of dedicated Fiore students, I had the pleasure of meeting for the very first time) in a round-table discussion and Q&A on armizare. We looked at the three volte of the sword, some questions about movement and covers in the dagger material, and a “chicken & egg” debate over what order the four surviving manuscripts may have been created in and what suggests this. The round table was certainly fun to participate in, and I think the audience felt they got something out of it. At least, they were polite enough to tell us so! 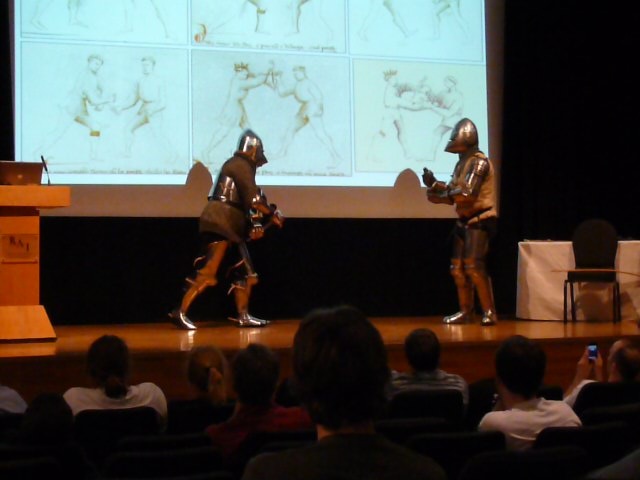 As always, Jesse was my trusty demonstration partner and assistant, and he was also commandeered by Sean Hayes for his own class on decision making and tactics with the sword in two hands. Other classes on armizare included Rob Lovett’s extended  class on how to move back in forth between using the sword in one hand, in two at wide play, at narrow play and the techniques of the sword in armour, within the context of a single fight, an intro to Fiore class for new students taught by the members of the Abdereen Swordsmanship Group, and a fantastic lecture on armour depicted in the Flower of Battle manuscripts by Barry, also from the ASG.

Concurrent with all of this was another “themed” track, focusing on 19th century antagonistics, and that most Holmesian of martial arts, bartitsu. (No idea what I’m talking about, take a peek at www.bartitsu.org.) I would loved to have seen the various  classes on pugilism and cane-fighting, but, of course, I was ‘at work’ on the other side of the room, so I only got a chance to catch glimpses vicariously. There were also classes on English two-handed sword fencing, the Italian rapier, the partizan, and a great deal more, rounding out the packed, two-day schedule. 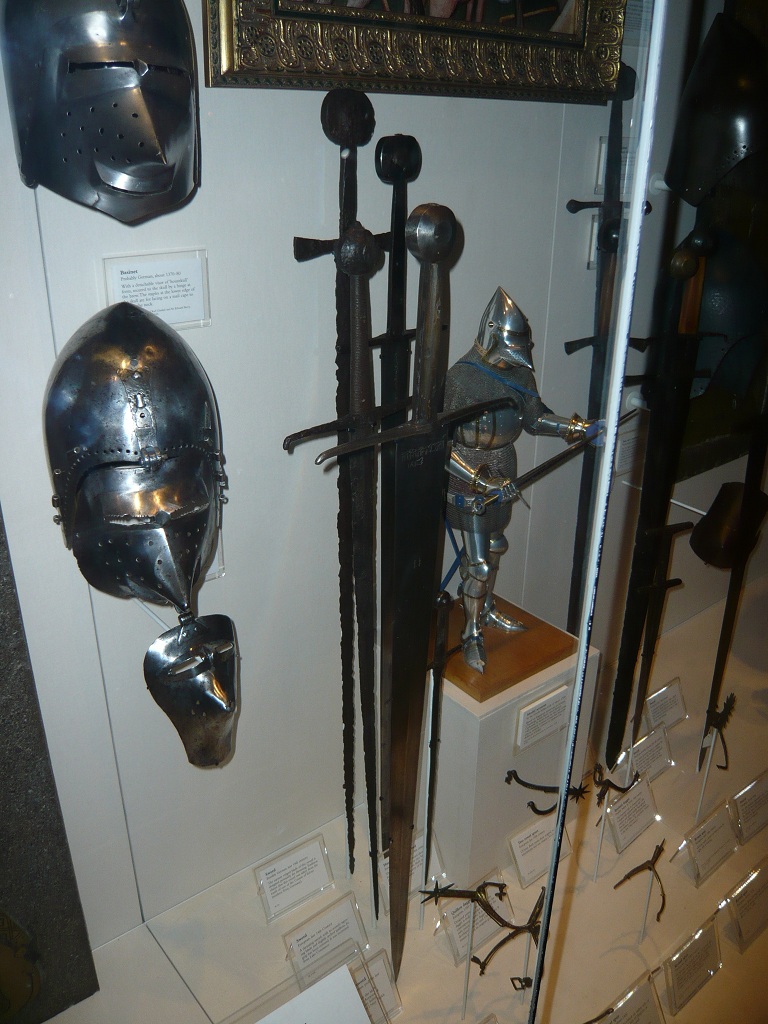 Probably the highlights from the perspective of Jesse and I was the chance to wander the Royal Armouries and be literally surrounded for two days by four flours of arms and armour, ranging from Paleolithic clubs to theoretical prototypes of “next generation” guns and body armour. The Medieval and early Renaissance collection, which naturally, was of the greatest interest to us, is just stupefying. There were some wonderful pieces that corresponded directly to Fiore’s era and his manuscript, including more bascinet helmets then I’ve ever seen together in one place, (one of which my own helmet is based upon), swords and rondel daggers, and a horse chamfron (head guard), that would have looked far more at home on the head of a draft horse, than the Andalusian breeds that seem to be the direct descendants of the medieval war horse. But one of the coolest “Fiorian” pieces had to be an early-partizan/winged spear that was *identical* to the ghiavarina depicted by Fiore for use against cavalry. I need one! 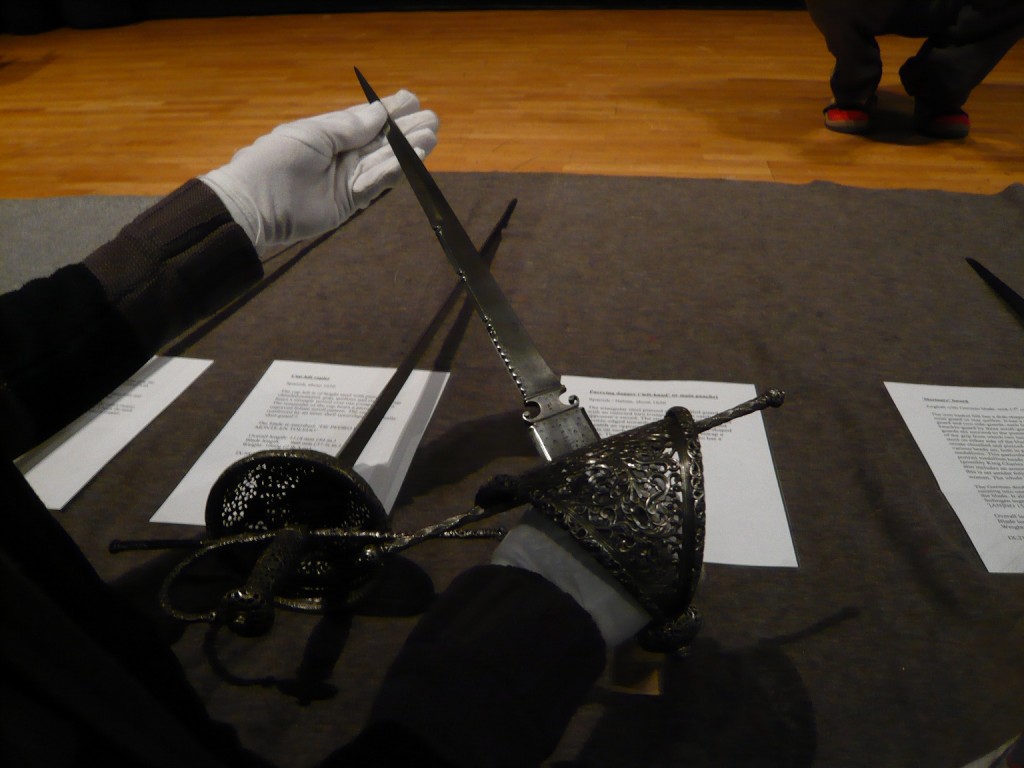 There was also a handling session arranged with the armouries, where attendees were given the chance to lay hands on a number of swords, rapiers, daggers and bucklers from the 14th – 18th centuries. While this is always an amazing experience, the more exciting part was that the Armouries curators also brought out their prized fencing treatises. This includes a colored copy of Agrippa’s famed 1553 treatise, the massive, 1620s opus of Gerard Thibault, but most importantly, the famed Royal Armouries Ms. I.33, the oldest surviving fencing treatise in the world (c.1300). An anonymous, German text on sword and buckler fencing, I’ve seen colored scans many times, including hi-resolution scans that I worked with as I helped prepare Dr. Jeff Forgeng’s modern, English translation and edition of the work. And yet, seeing this amazingly preserved work in person, the first thing that struck me was that the vibrancy of the color and “depth” of the images simply has not been conveyed in photography.It was just amazing having a chance to thumb through this piece of history.

The other amazing highlight was the gala dinner, a formal event held after closing hours within the armouries itself. The evening began with a wine reception in one of the galleries, and a fascinating partizan exhibition by the 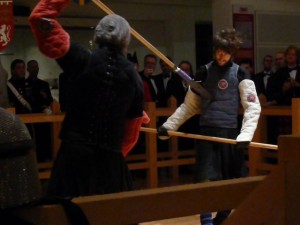 gentleman from c.1595, a group dedicated to the work of the Elizabethan fencing master, Vincentio Saviolo. From there we had dinner within another gallery, surrounded by centuries of history, after which there was an hour for us to wander the museum by ourselves. It’s really hard to put into words the “wow” factor, especially for we Americans, who obviously do not have access to the sort of  material artifacts that our European counterparts do.

I also met a number of wonderful folks, both new to me, and previously known only by their posts here, from Mark Hillyard, whose modesty and affability hid an insidious plot to prove just how much weaker at beer consumption we colonials are compared to our English counterparts to Albert Bomprezzi, maestro de armas of the Spanish fencing federation AEEA – Asociacion Espanola De Escrima Antigua. Alberto is about as fine a gentleman, teacher and swordsman as you will meet. My only regrets are that SWASH’s schedule is fairly packed, and the Armouries needed us out sharply at 5 PM, so there was little time to play or compare notes without having to skip classes. I would very much like to have taken the partizan class, and was sorry to miss the antagonistics track. Likewise, I regret that my short time in the UK meant that I did not get to meet anyone who wasn’t at SWASH. England’s a small country, but six days, one of which involved travel, sure goes fast.

By the time Jesse and I returned home, lack of sleep, English beer and jet lag had all taken their toll, but it was well worth it for a very magical week in Merry Olde England. 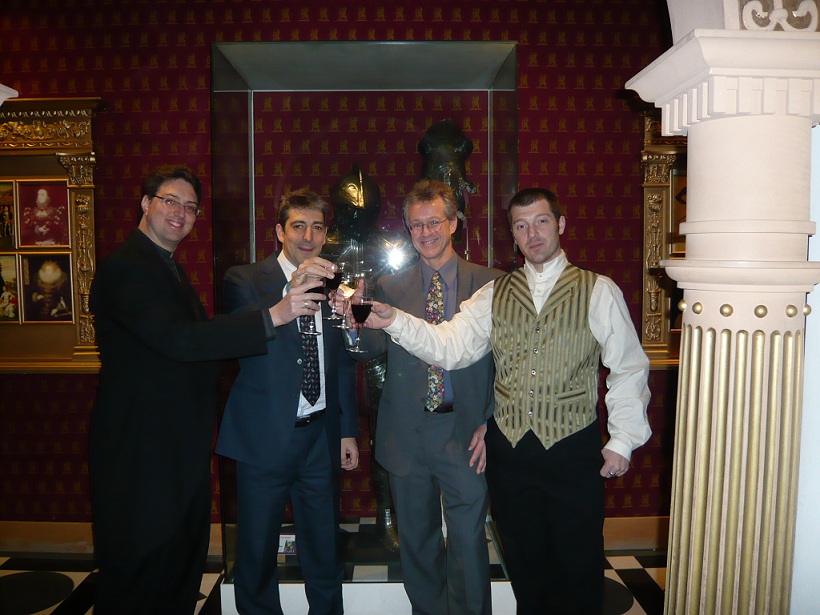