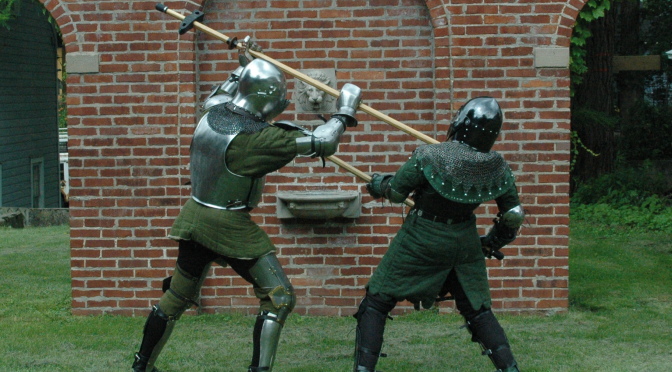 The poleaxe (or pollaxe) was one of the principle “knightly” weapons of the 14th – 16th century, and is related to the “common” halberd. Amongst the Italian masters, its use was taught by dei Liberi, Vadi, Pietro Monte and the Anonymous Bolognese master, all of who simply call it l’azza or l’acca (the axe).

A weapon designed for use specifically in and against armour on foot, the poleaxe first begins to appear in illustrations in the mid-14th century, slowly gaining favor over the older two-handed “battle axe”, whose pedigree extended back to the Viking era. It was commonplace by the end of the century, and was a preferred weapon for performing judicial combats and feats of arms in the 15th century. Although its popularity began to wane in the Renaissance, its popularity in the tournament lists lingered; as late as the 1620s, Francesco Postolfilo detailed its use in his book, Il Torneo.

The weapon can be divided into several parts, the haft (asta), the head, which was in reality a conglomeration of weapons, and the heel (pedale), which could be simple wood, but was often shod with iron or fitted with a long spike (calico). As a response to plate armour, the poleaxe seems to have grown out of two other weapons: the aforementioned two-handed axe and the warhammer, and its head developed along two distinct forms. The first was an axe proper, with an axe-blade, whose profile could be straight or curved. The blade was generally somewhat thicker and smaller than those found on the halberd. The second form replaced the axe blade with a smooth or pronged hammerhead, like that of a warhammer, the prongs increasing the chance of biting into the armour.

Regardless of hammer or axe head, the weapon was known as a poleaxe, and the masters at arms taught a single method for its use. And regardless of axe or hammer, the rest of the weapon followed a single, common form. The other side of the head was usually a long, hooked spike (called a “beak”), and was topped by yet another spike, which could be either a tapered and edged spear-head or a simple spike of round or square cross-section. The head was attached to the haft by a pair of long iron strips, called langetes, which added security and protected the haft from being broken by other polearms. The haft was also often fitted with a rondel below the head, protecting the lead hand.

The overall length of the weapon could vary considerably. Fourteenth century art suggests a weapon of 4-6 feet [1.2-1.8 m] in length, but later writers, such as Monte (1509) and Pistolfilo (1620s) recommend a weapon approximately eight feet [2.4 m] in length. However, a weapon that is approximately the wielder’s height, plus or minus half a foot [15 cm], seems to have predominated. The weight of surviving specimens suggests a weight of 4 – 6 lbs [1.8-2.7 Kg], creating a weapon yet surprisingly well counterbalanced; poleaxes often feels notably handier than the related halberd.

Like all knightly tools, poleaxes could be beautifully decorated with etchings and piercings, their elegance belying their deadly purpose.