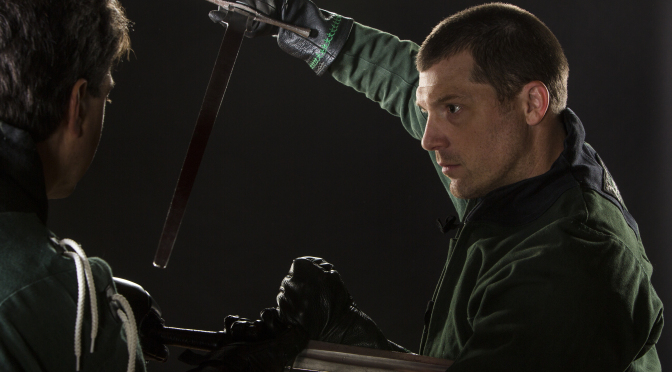 Of all the weapons devised by Man in the long lapse of the centuries, the sword is the only one which combines effectiveness in defence with force in attack, and since its Bronze Age beginnings has gathered round itself a potent mystique which sets it above any other man-made object.

The sword of early medieval warriors was a refinement of the yard long, double-edged slashing swords developed by the Iron Age Celts and the Germanic tribes of late Antiquity that supplanted them. In form, they were wide-bladed, single-handed weapons designed for fighting with a shield. Usually between 36″ and 42″ [91-107 cm] long, with a weight of only two to three pounds [0.9-1.4 Kg], the early knightly sword had either parallel or slightly tapered edges and an abrupt or somewhat rounded point used for hacking cuts and limited thrusting. The earlier blades were usually a relatively thin, flat cross-section with a wide central fuller to reduce weight and allow for great flexibility. Later swords either had only a partial fuller, with the last third of the blade ending in diamond or hexagonal cross-section, or were of diamond cross-section throughout, but maintained a deeper, narrow fuller running nearly the entire length of the sword. There was no specialized term for this weapon; it was merely called a sword.

The same changing battlefield conditions of the High Middle Ages that led to the development of the longsword, also led to the development of new varieties of arming swords, as the one-handed weapon was now sometimes called, because it was as a sidearm worn while “in arms”. Fullers were often made short and wide, allowing the weapon to be stiffer near the tip as a new emphasis was put on the thrust. By the mid-14th century some swords carried this emphasis even further by replacing the fuller altogether with a riser, a raised spine, making a very stiff blade, and/or with sharply tapering edges, producing the silhouette of a broad isosceles triangle.

In the late 15th century, some arming swords had a simple ring affixed to their guard, so that the index finger could be wrapped around the cross for greater point control, without being endangered if the opponent’s blade sliding down its length. By the end of the century, this simple ring was also sometimes accompanied by a knuckle bow, and the first “complex-hilts” were born.

During the 16th century, sword blades often became slightly slimmer, longer (34-36″ [86-107 cm]) and more tapered, allowing for smaller, faster cuts and greater point control. It is from this development of the sword that the rapier would evolve. Eventually, the new hilts became the “swept hilt” and then eventually grew into the basket hilt of the late 16th, 17th and 18th centuries. Yet, while the development of the hilt eliminated the need for a gauntlet, the overall method of fencing with this weapon seems to have changed very little from dei Liberi in 1409 to Angelo dall’Aggochie in 1572. For a time in the late 16th century, all of these variations of the arming sword, cruciform hilt, simple and swept complex hilt and basket-hilt, and all would have largely been used in the same fashion.