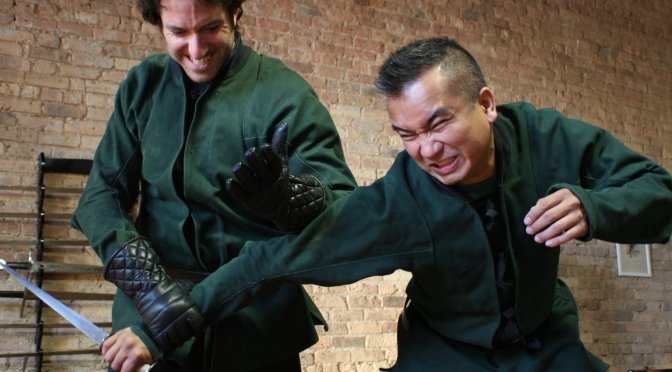 I am the noble weapon called the dagger, who much desires close play. He who understands my malicious deceptions and my art possesses a good part of every subtle exercise at arms …Whoever sees me in the deed of arms, will see me make covers and thrusts with abrazare, taking the dagger from the opponent with turns and binds. And weapons or armour are worthless against me.

In the early Middle Ages, the dagger or long knife (called a daga by the Italians) was often carried as a back-up weapon by spearmen, as a substitute for the sword; it was only in the second half of the 13th century that the dagger begins to be depicted as a sidearm worn with the sword, in form it usually looked like a sword in miniature. By the following century, wearing sword and dagger had become commonplace, and by the late 14th and 15th centuries, men-at-arms are almost universally depicted with a new sort of dagger – the rondel.

The rondel dagger derives its name, subtly enough, from the “rondels” or discs that serve as both a guard and pommel (early examples, sometimes had spherical pommels, but this was uncommon by the mid-15th century). The two discs serve to “lock” the dagger tightly into the wielder’s grip, particularly when wearing armoured gauntlets. This locked grip allowed the wielder to strike with great force, particularly in an overhand grip, emphasizing the dagger’s principle role of punching through mail and the articulations of plate armour.

The blade is less clearly defined, and can be double-edged, single-edged or even edgeless, turning the dagger into a giant ice pick! All are quite long (Vadi recommended the weapon be the length of a man’s hand and forearm), tapered to acute points, since the emphasis is on thrusting. In general, however, there are several forms of rondel that are more common then others. The first and most common is single edged, with a thick, blunted spine, which may or may not flatten into a small “false edge” for the last two or three inches of blade length. The second is hollow-ground, triangular, and edgeless (or nearly edgeless), designed specifically for punching through armour. Sometimes the last few inches of these blades flatten into a more traditional profile, giving the dagger a narrower surface at the point of impact for finding purchase. The third form is also a glorified punch, but seems to have been rare, and was of round or quadrangular cross-section. Finally, rondels do appear with a more traditional, double-edged dagger blade, but these seem to have been the rarest of all.

The older form of sword-hilted dagger never died out, however, and as the dagger became a popular piece of civilian fashion, continued to thrive. With the waning of both body armour and the buckler or hand-shield in the 16th century, there was a rise in popularity of sword and dagger fencing, and the dagger took the form of a long, double-edged poniard (Italian pugnale). This was the weapon taught by the Bolognese masters, both alone and combined with the sword or the cape, and it remained a common companion of the rapier throughout the 17th century.

The sword was carried on the left hip while the daga/pugnale was worn on the right. There were a number of ways in which it the dagger might be carried and suspended. In civilian wear, the dagger was worn on the waist belt, with or without a sword, usually beside or behind the purse. It could be hung vertically, horizontally or at an angle in between, as the owner preferred. If a sword was not worn, the dagger and purse might be rotated forward, even to the center-front of the torso. In armour, the dagger was often attached directly to a metal “plaque belt” or to the fauld of the armour, and again could be suspended either vertically or horizontally. During the 14th century, the dagger was sometimes attached to the body armour by a long leading chain, so that, even if it slipped from the hand upon being drawn, it could not be dropped. By the end of the century this fashion had faded away, and as the plaque belt disappeared in the 15th century, in armour the dagger began to be worn on either a narrow waist belt, or directly on the sword belt. In the 16th century, the dagger was often worn at an angle at the right side, or across the back, with its hilt turned to the left, both of these methods facilitating a left-hand draw, as the sword was drawn with the right.